Acupuncture is an ancient medicine. Its first mention is over 10,000 years ago, and its first major medical text, Huang Di Nei Jing (Inner Canon of the Yellow Emperor) is over 2000 years old. Every culture has had some form of acupuncture in its medicine cabinet, and a few forms of acupuncture styles remain to this day.

While there are over 365 acupuncture points, clinically, Traditional Chinese Medicine relies primarily on 50-100 points. Diagnosis are based on symptom presentation as well as listening to the pulse and observing the tongue. Diagnosis aims to find the root of the symptoms, and points are selected according to defined point functions—on the body, ears or scalp—and meridian theory. Needling can be superficial or deep, ranging from 0.2 inch to 6 inches, depending on area and indication. Occasionally, electrical stimulation is used to augment the treatment.

Within Japanese Acupuncture, there are several famous schools of thought, yet they tend to share the same philosophy of gentle needling, using fewer needles, shallower insertions, and choosing points that have inherent relationships with each other. Occasionally, ion pumping cords are used to facilitate the balance of ions across the body. On rare occasions, for those who are needle sensitive or for the very young or very weak, specialized tools (teishin, choki and choto shoni-shin tools) are used above the acupuncture points.

It may seem unusual that acupuncture can be so effective without ever needling the point. In Chinese, the word for "point" is xue, which means "cave." As with any cave, this word communicates a 3-dimensional space. The needle rests in the cave while the shoni-shin tool hovers at its entrance. Both tools are effective in creating movement of the energy at the point to restore health to the meridian.

Seeing health as a garden, Chinese Medicine ascribes element from nature to organ systems. The five elements are: 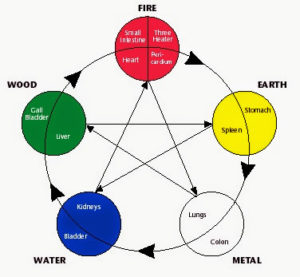 While many other styles of acupuncture exist—Korean, French-Vietnamese, or Barefoot Doctors, to name a few—depending on symptom presentation, vitality of the patients as well as their preferences, needling prescription may be predominantly TCM, Japanese, or 5-Element in style, or Acutonics or Aroma Acupoint Therapy maybe used in conjunction with or in lieu of needling. The goal is always the same: to return balance between the organ systems, harmonize the flow of energy between the 12 meridians, and be a witness to the eternal dance between yin and yang.