"Yin and Yang are not absolute, but their principle never changes. The reaches of Heaven and Earth and Yin and Yang are vast, and ultimately everything in the universe can be classified into the polarity of Yin and Yang." - from Huang Di Nei Jing

The Flow of Rivers

Chinese Medicine approaches the health of the body from the perspective of a gardener. A happy, healthy garden has good soil with adequate drainage, good light with appropriate shading, good flow to its surrounding landscape, good balance within itself for the kinds of plants that thrive in that particular environment. Rain is neither too much nor too little. Harmony is achieved when everything is balanced.

Injuries and blockages may interferes with the flow of water like rocks and boulders, and deficiencies may disrupt the flow like drought. By precisely opening certain gates, the master gardener restores healthy water flow in the river systems. 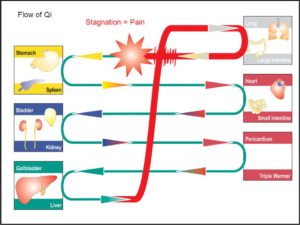 People frequently wake up at 3am and need a nap at 3pm. Blood pressure rises when we get angry, and bowel movements become loose when we are anxious. These are examples of Liver pathology according to Chinese Medicine. The Liver is in charge of free flow of energy between the 12 meridians, managing emotions, controlling the tendon, and opens to the eye.

The Liver meridian is strongest from 1-3am, when it runs out of time to complete its work, it heats up and wakes us up. From 1-3pm, the Liver meridian is lowest while the Small Intestine is at its peak), thus we need a nap to digest our food as well as retreat from too many obligations or social interactions.

The Liver energy tends to rise, especially when there's not enough "Yin" to anchor it. Yin nourishing foods are Liver-healthy foods: green leafy vegetables and healthy oils. While there are many symptoms of Yang rising—headaches, dry eyes, ringing in the ears—blood pressure is its most common symptom.

The balance between the meridians is disrupted when one meridian overflows. The Liver normally controls the Spleen (note: the Spleen is more properly translated as "Pancreas" but the mistranslation persists; the Spleen is in charge of digestion in Chinese Medicine). When water is properly reabsorbed from the stools, it becomes well-formed and easy to pass, but when the Liver overflows its boundaries, the Liver "attacks" the Spleen, causing disruption to the natural gentle upward rising nature of the Spleen, resulting in loose bowels.

Critics of Chinese Medicine may look down upon the archaic language and poetic descriptions. These three symptoms are just a small sample of the many accurate observations made by Chinese doctors so many thousands of years ago. In Western Medicine, one would take a different medication for each symptom; whereas in Chinese Medicine, one would "sedate" the Liver to help it come to balance with its neighbors.

One Disease, Many Patterns; One Pattern, Many Diseases

A headache is not just a headache in Chinese Medicine. For example, a headache can come on after exposure to cold and wind such as those accompanying upper respiratory infections. The headache can feel heavy with pressure, empty and hollow, throbbing and pulsating. Each of these pattern requires a different treatment approach in Chinese Medicine: to drain damp, to supplement Qi + Blood, and to move Qi + Blood, respectively.

A headache is a symptom, not a disease. Chinese Medicine refers to symptoms as "branches" while diseases as "roots." The pattern of differentiation attempts to get as close to describing the roots of illness as possible. An example of a root is Kidney Yin deficiency, which has symptoms such as weakness and soreness of the back, ringing in the ears, dizziness, dry mouth and throat, heat sensations in the palms, soles and chest, feverish in the afternoon hours, night time sweating, constipation, and seminal emission.

The Kidneys store Essence (DNA, cellular intelligence, energy), regulate life processes especially reproductive cycles, govern the bones, in charge of the knees and spine, opens to the ears, and they are the "root" of all organ systems in the body. When Kidneys become deficient, eventually every organ suffers alongside with them.

Yin and Yang are eternally engaged in a mutual dance of becoming and transforming into each other while balancing each other. Without enough Yin to anchor the Yang,Yang rises to cause ringing in the ear, dizziness, and seminal emission. Without enough Yin to cool the Yang, there is relative heat in the system—deficient heat that smolders and not excessive heat that blazes—which gives rise to abnormal sweating, sore dry throat, and constipation.

Chinese Medicine is inherently holistic because it aims to treat the "roots" of diseases so that the "branch" symptoms resolve themselves.