"When a plant’s leaves are turning brown you don’t paint the leaves green. You look at the cause of the problem. If only we treated our bodies the same way." -- Dr Frank Lipman

With the Process of Healing in mind, the Therapeutic Order is the guideline for Naturopathic Medicine prescriptions. Just as a house is built on a good foundation free of boulders and inclines, brick by brick, health is built on these determinants: proper diet, hydration, exercise, fresh air, rest, play, meaningful relationships, and spiritual practice. What is “proper” is very individualized and can change according to seasons and circumstances. 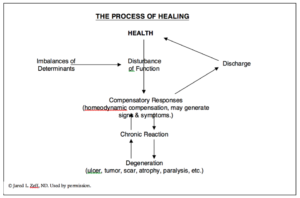 When there are imbalances in the determinants, the body becomes vulnerable to internal disturbances and external invasions. A healthy body compensates, and these responses may register as signs and symptoms. A strong, vital person often generates strong, intense symptoms, as is the reverse. When successful, the body discharges the accumulated toxins or throws of the invading pathogens and returns to health. If unsuccessful, the body will continue at its attempts to compensate, entering a chronic reaction phase until it no longer can compensate, at which point the body gives up and allow degeneration to occur.

Non-suppression of symptoms is critical to the healing process. Taking away the fever when the body attempts to mount an immune response is like throwing a water over a campfire just when it’s needed to cook a meal. The efficiency of the immune system cells and the enzyme systems fueling their efforts is thwarted while allowing pathogens to thrive at a more comfortable temperature.

If there has been a long standing illness, the recovery usually follows Hering's Laws of Cure: All healing starts from within out, from head down, and in the reverse order as the symptoms have appeared or been suppressed. The practice of taking out blinking light bulb is not deep enough to elicit cures because it doesn't allow the body to address its inherent imbalances, deficiencies, dysfunctions.

The major difference between Western Medicine and Naturopathic Medicine is in the trust in the Vis Medicatrix Naturae, the healing power of Nature. What is this Nature and how does it heal?

Broadly, Nature can take on the collective meaning that includes everything in the physical world, especially everything that is not man-made. Being out in Nature is healing because the lungs take in fresh air, the muscles are exercised, the eyes see far to the horizons, and the mind relaxes. Specifically, Nature can also mean each person’s individual nature: what makes John John and Jane Jane. When John is depressed or when Jane is anxious, John is no longer John and Jane is no longer Jane.

While anti-depressants and anti-anxiety medications have their place in medicine, the more important questions to ask John or Jane might be:

In treating the whole person, Naturopathic Medicine looks for the root cause. A sign or a symptom is a signal of imbalance, and the nature of imbalances is to lead away from the center. Left unresolved, emotions—or E = motions—may become stuck in our tissues and expressed as illnesses.

The healing journey compels deep introspection—to find the places where we noticed the path diverges. 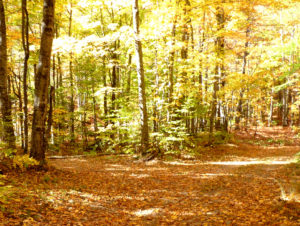 A Leap of Faith

For ten years after my diagnosis, I struggled to regain my health by using tools from both Western Medicine and Naturopathic Medicine/Chinese Medicine. According to Western Medicine, lupus is an autoimmune disease where the body failed to distinguish self from non-self. In other words, my immune system was faulty and attacked my own tissues; hence, the many measures to suppress the immune system were the mainstay of treatment. On the other hand, Naturopathic Medicine and Chinese Medicine sought to support my body many functions, including my immune system.

Like a house divided, I saw no real progress in my health until lisinopril—a blood pressure medication prescribed to slow the loss of protein through the urine—induced kidney failure. Even though this event triggered a deep depression, I came out of it by deciding to take a leap of faith. For however long I might be on dialysis, I would commit myself fully to the fundamental philosophies of Naturopathic Medicine and Chinese Medicine. Western Medicine had done its best to prevent progression of the lupus and had failed, so I was free to focus entirely on holistic measures to rebuild the foundations of health. It took me seven months to regain my kidney functions, and I have been healthy and well since.